This essay builds upon research conducted for an in-progress exhibit on the history of Pavilion X, a collaborative project spearheaded by Ian Solomon, Dean of the Batten School of Leadership and Public Policy, and JUEL.

Pavilion X was the residence of UVA Law professors for over a century. Its Law residents included John A. G. Davis, Henry St. George Tucker, John B. Minor, and William Minor Lile. Each of these men, along with their families, lived consecutively in the pavilion from 1833 to 1936–and Law Dean Frederick D. G. Ribble, who occupied the pavilion from 1942 to 1967. Prior to the construction of Minor Hall, the first purpose-built Law building, and between uses of the Rotunda Annex as classroom space, professors taught and lived in the pavilions.[1]

The pavilion’s construction was overseen by William B. Phillips, a Virginia brick mason who was hired to work on three of the ten pavilions, and carpenter John Neilson. Receipts paid to Phillips indicate that construction on Pavilion X began in 1821.[2] Like the rest of the Academical Village, much of the pavilion was built by enslaved workers, and the University depended on their stolen labor and knowledge to complete the elaborate and expensive pavilion structures. Recent archaeological work has uncovered artifacts in Pavilion X believed to reveal some information about the individuals who labored there. A saw handle stamped with the name “A. S. Brockenbrough” was found in the attic of Pavilion X and is now displayed in the history exhibit in the Rotunda basement. Researchers believe that the saw was likely sold by Brockenbrough to the University or used by a man who had been enslaved by Brockenbrough and hired out to the University.[3]

Pavilion X originally included two levels and a basement, which served as living quarters for the professor, his family, and enslaved workers, and a lecture room where classes were taught. The pavilion’s first resident was Professor of Anatomy and Medicine Robley Dunglison. Dunglison contracted with John Hartwell Cocke to hire an enslaved man named Nelson, who worked in Pavilion X’s garden and stables.[4] Dunglison also purchased and held people in bondage, including Fanny Hern, her youngest child, and her husband, Davis Hern.[5] In 1828, Dunglison petitioned the Board of Visitors for permission to construct an outbuilding behind Pavilion X, described explicitly as a “building for the accommodation of servants.”[6] The Board granted permission and reimbursement to Dunglison for this expansion and other modifications, and following Dunglison’s retirement in 1833, Law professor John A. G. Davis moved across the Lawn from Pavilion III into the larger Pavilion X.[7]

While teaching at UVA, Davis’s household included both his family and a large group of seventeen enslaved workers.[8] Even with the changes made to the pavilion by Dunglison, Davis sought permission from the Board of Visitors to further expand his space. In August 1836, Davis requested “a suitable kitchen” in the rear of the pavilion; it is not clear whether he intended to expand the pre-existing outbuilding or the garden-facing side of the pavilion itself. In his remaining years in Pavilion X, Davis began to rent the two dormitories adjacent to the pavilion, although the reasoning behind this decision is unknown.[9] Davis also maintained a separate property off University grounds, still standing at 1201 Jefferson Street, during his tenure as Law professor.[10] Davis was shot and killed on the Lawn in front of Pavilion X in 1840 by a rioting student. There is no evidence that his temporary successor, Nathaniel Pope Howard, moved in after Davis's untimely death.

Henry St. George Tucker, who officially succeeded Davis as law professor in 1841, also owned a separate dwelling nearby as he occupied Pavilion X. Tucker, who enslaved 46 men, women, and children in 1840, relied heavily on enslaved labor to maintain his wealth and household.[11]

Following Tucker’s retirement in 1845, John Barbee Minor became the University’s law professor and moved into Pavilion X. He and his large family occupied Pavilion X during his fifty-year tenure at UVA Law. Minor, who was twice widowed, raised eight children there (two predeceased him). His son, Raleigh C. Minor, later followed in his father’s footsteps and taught at the Law School from 1893-1923. The U.S. Slave Schedules from Minor’s years at UVA record that he enslaved six Black individuals in 1850 and between nine and eleven in 1860. Furthermore, while residing at Pavilion X, Minor regularly hired out enslaved workers in Charlottesville and continued to oversee similar agreements at his family home. An enslaved woman named Ellen is mentioned in the letters of Minor’s daughter, Mary, as returning to Pavilion X after suffering a severe beating from the man who had rented her. While living in the pavilion, the Minor family relied on enslaved laborers to run the household and work in its gardens; after the Civil War, some of these formerly enslaved workers continued to work for Minor as paid employees and housekeepers.[12]

During Minor’s tenure, Pavilion X expanded yet again. Citing the size of his family, Minor requested funds for an addition that would create more bedroom space in the pavilion. The Board of Visitors granted permission for such a project in 1878, and in following decades, Minor continued to seek modifications to the pavilion including an indoor water closet.[13]

Minor and his family resided in Pavilion X throughout the Civil War and Reconstruction. From Pavilion X, Minor penned many letters to his cousin Mary Blackford recounting his views on secession and slavery. He also recorded his overall impressions of the war in his commonplace book. Minor’s reminiscences relay his trepidation about the movement of Union soldiers near Grounds and the vulnerability he felt inside the walls of Pavilion X. He recalled one specific incident in which two soldiers approached Pavilion X and inquired with his enslaved servants and wife regarding contraband as well as any valuables in the home. Minor negotiated with the Union to protect Grounds and secured a guard to ensure the preservation of the University. For enslaved people, like Minor’s servant Henry, approaching Union troops held a different meaning. Henry and many formerly enslaved people in Charlottesville took this opportunity to escape and claim their freedom.[14]

William Minor Lile, who had begun teaching at the Law School in 1893 and became its first dean in 1904, moved into Pavilion X in August 1896, a year after the retirement and death of John Minor. Lile’s second son John Allison Lile was born there in 1898 and, later, two of his grandchildren. Lile recorded the majority of his diary entries from Pavilion X. He relished in the opportunity to raise his family in a “fine old house…full of delightful memories.”[15] But he lamented the increasingly commercial relationship between professors and the University in terms of pavilion occupancy. In a journal entry from April 20, 1927, Lile catalogued many of expansion projects carried out by Minor. He also mentioned a third bathroom, added to the pavilion’s second floor, during his own family’s time in Pavilion X.[16]

According to the census, several Black workers labored in Pavilion X during Lile’s tenure: Charley Smith, Jenny and Lara Howard, Annie, and Henrietta.[17] The daily tasks of these individuals involved tending to Lile’s grandchildren, preparing meals, and taking care of Lile during his illness. While Lile’s recollections include references to cooks, servants, and nurses, he seldom referred to these individuals by name. Yet, he considered them fortunate to serve him and his family.[18] Lile’s family remained in the pavilion until 1936 when his widow Maud Carson Lile relinquished the premises a year after his death.

Following Lile’s death, Pavilion X was no longer reserved as a Law professor residence, although Law Dean Frederick Ribble lived in the pavilion for 25 years in the mid-20th century. 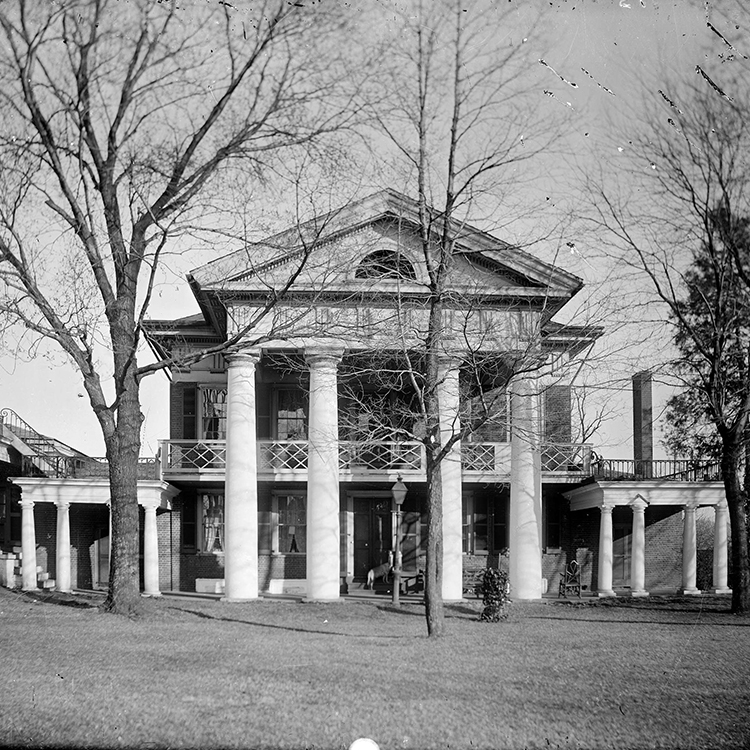